I took it on the suggestion of fine folks at the Syntax podcast to create a page that lists out the things I use regularly. These things will change over time but this is a fairly complete list of the things I use for creating imagery, building websites, and writing music.

Musical instruments are expensive! For all the dollars that are poured into them it pales in comparison to the satisfaction and happiness that comes in return.

This guitar has been part of the family for well over 10 years. Never underestimate the quality of a well made acoustic guitar. It feels like it get better with age. This is a basic dreadnought guitar. It’s a satin fisnish rosewood back and side with a gloss spruce top. No fancy in-lays. No stock electronics. Just a good sounding guitar. It’s been said more than once that it’s a “hurricane of sound”. Okay, I said that on many occasions. But it is true. These instruments are such powerful and intimate things. You play them hugged up tightly to your chest. You feel the guitar swell through you as you play. It’s more than just notes being plucked and strummed, it’s energy that heals and soothes. As one who does a lot of recording, I find this particular guitar a bit of a challenge to record. It’s so full and rich that it wants to be the hero in recorded music. Taking away too much tone when tracking this instrument to have it fit in the mix feels like a sin, like your throwing away the dishes after a meal. Over time I’ve come to realize that there are pros and cons to this full sound. Solo fingerstyle guitar is a natural fit for this full sounding guitar. A close mic setup makes a recording feel like you’re sitting right there. Strumming and background rhythms are a different story. I tend to EQ out the low mids and compress it heavily to get it to sit in the mix and behave. 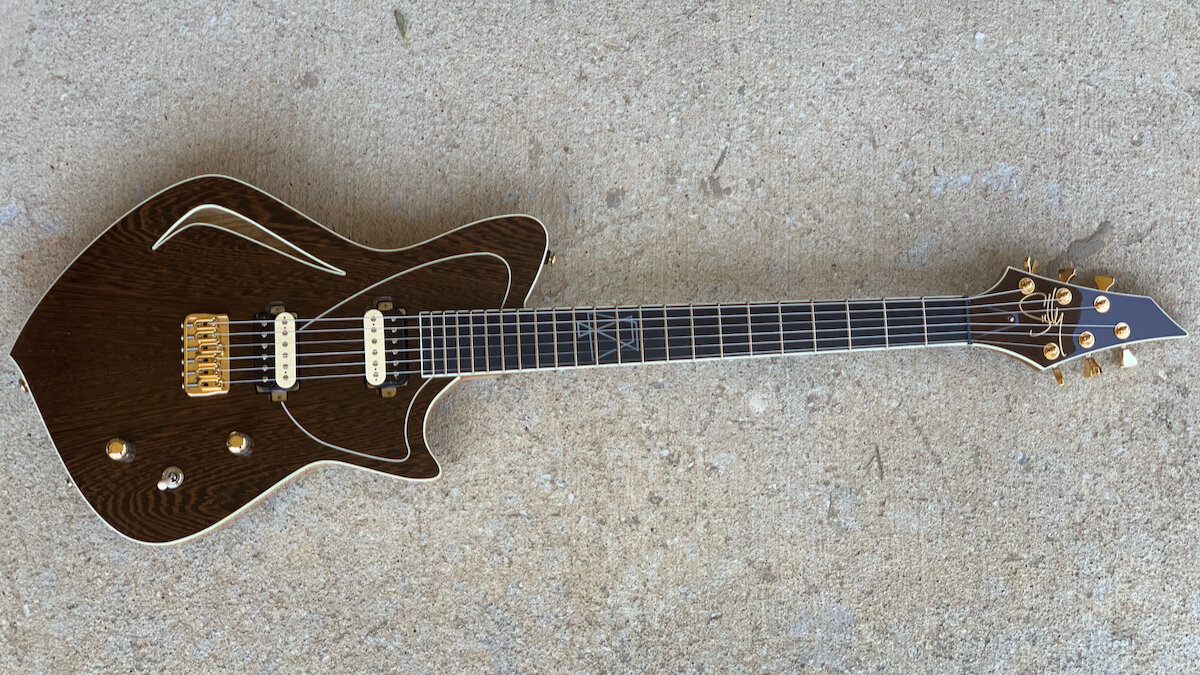 Oh my god, I love this guitar. It’s a beast and a beauty all in one. I had decided 10 years before buying a Sully that I was buying a Sully… I just didn’t know it yet. There’s something pretty amazing about playing a guitar that has been built from the ground up by soeone who is surely more passionate about guitar building that you can imagine.

This guitar has a wenge top and swamp ash body, an ebony fretboard, Hiphot bridge and locking tuners, and a roasted Maple neck. It has a tone port. Does it make a difference? You bet your sweet banannas it does. I cover up that toneport and small animls cry with sadness.

Sully builds the best guitars I’ve ever had the pleasure of playing, and he’s a really good guy. Stop playing the same old crap and get yourself a Sully.

I have the 2018 veresion of this guitar. It’s a purple quilted maple top over mahogany. It’s purple. Do i really need to say any more? I’ve played several PRS guitars and they all have an ease and approachability to them. You pick them up and they feel like they’re ready to play.

This model has a spring tremelos system built-in that is tight and responsive. I would trade this in for a fixed bridge version as I feel that there’s a beefy sustain with there’s less mechanics to absorb energy from the strings.

Again, this link shows specs that are close to what I have. Mine is solid blue mahogany body with a fast neck. This guitar is light! Compared to the 6-string above, this guitar comes in a little lighter and feels so well-balanced.

The link is to a guitar that looks much like mine, but there’s no page that exists for my ancient relic. It’s 20+ years old. It feels great, plays like a slinky, and sounds like a strat. It doesn’t get played as much anymore but every time I pick it up it feels like home. It was my first electric guitar and I could never bring myself to get rid of it.

I’m not really a bass player (but I play one on TV – no I don’t). This bass plays easy and smoother than some guitars I own. It’s a joy to mess around and learn on this thing. It stays in tune all the way up the fretboard. I have another Ibanez bass that has intonations problems (see below). There’s a wide range of sounds that you can get out of this. Active electronics bring a new level of control and the design elements of its construction is excellent.

I’m not a bass player so I’m sure I’m missing out on a lot of what a much better bass can deliver. But I really dig its sound, the playability, and punchiness from the shorter strings. The link is to Sweetwater Sound’s page for this guitar (and any musical instrument) and I highly recommend buying from them if you’re interested in it. This is a low-cost bass. And it’s a good choice if you are just starting out and want a scale lenght that is similar to that of a guitar. But keep in mind that you get what you pay for. Once I get above the 5th fret or so, the intonation starts to drift. It drifts far enough that I’ve maxed out any adjustments on the saddle.

This is really a great little controller! Pads, buttons, and sliders make it so much fun to control and create with. I’ve mapped some of the buttons to do special things, including being able to quickly set a tempo (like a tap tempo).

I have an older version of what’s listed in that link. Not much has changed with it over the years. I’m a little too heavy-handed with it – it’s so lightweight. But 88 keys wins when it comes to piano composition.

Holy crap these drums are fun! Originally purchased for my daughters to bang on, it’s quickly become an integrated part of my music making. Linking the command unit up to Logic via USB, and now it’s a controller for my drum plug-ins – of which I use XLN Audio’s Addictive Drums.

Recording for me is a very personal process. Logic provides a path to making music that is efficient and fun. You can get as deep as you like technically, but the raw creation is rock solid.

Truley feels like working in the sutdio again when delving into this software. It’s in its early stages so the limitations are plenty. But, the powerhouse capabilities afforded by UA hardware and modeling makes this an extremely high quality audio path to digital recording. There’s a common question of, “Can one DAW sound better than another”? And I believe they can. LUNA sounds better. Often I’ll record my basic tracks in Logic and take those tracks and import them into LUNA for summing which I believe is better out of the box. Optional summing plug-ins from Neve and API really add clarity and headroom to you mix.

Not my “go-to” music production software. I hesitate to call it a DAW because I was using this software when it was just virtual instruments and no ability to accept and record audio. They’ve come a long way and have advanced functionality that now allows for multi-track recording and more advacnced workstations features.

Update: Sometimes a feature comes along that breathes life back into old software. In this case, it’s with the Reason Rack becoming a plug-in. This means that I can run the virtual instruments of Reason that I love so much all from within my DAW (Logic or Luna).

Yeah, these are not cheap interfaces. The price alone kept me from entertaining this as an option for years. There’s a price/value threshold that finally hit (due in large part to Sweetwater’s 0% interest). I made the purchase and took delivery of this small but powerful interface. This is an amazing audio interface! To be able to track in real-time with UA Audio’s Unison technology is a game changer. A near-zero latency and a host of software plug-ins, I definitiely feel like I have powerhouse tools at my disposal. Ideally, this is a solo engineer/producer’s tool. Unless you have a dedicated control room, limitations on monitoring can slow your down. 90% of what I’m making is purely solo. But for those times when I have other talent that is recording with an open mic, “headphone mixes” do require some creative thinking. The interface (and subsequent account on UA’s website) give you about a dozen plug-ins. Pultect EQ, UA Compressors, etc. To that I’ve added some additional plug-ins that I use nearly everytime I fire up the studio. They are: Fender 55 Tweed Deluxe ENGL Savage 120 Amplifier API Vision Channel Strip

Having come from a professional recording background, I always loved Yamaha’s NS-10 near-field monitors. If you make your mix sound good on them you were pretty much guaranteed it was going to sound pretty good outside of the studio. These have quickly become an indespensible part of my music making. Paired with the subwoofer, this monitoring “system” provides a high-end home recording experience. It’s not the studio, but it sounds amazing!

Bright and clear. They lack substance on the low-end, but it’s headphones… it’s difficult to get accurate low-end this close to your ears.

I have a few MXL Microphones.#

For the dollar, these mics are a great value. There are other brands and mics that sound better, but I just can’t justify the cost for home recording. MXL 604. This link is to a newer version (the 606). A “cigar” condenser mic with a small diaphragm. I love using this on acoustic guitar right on top of the fretboard around the 12th fret. MXL 2006. Large diaphragm condenser mic. Lots of body and warmth. MXL V67G. Much like the 2006 above with more clarity and transient response. Over the course of a few years, this has been my go-to mic for vocals and fingerstyle acoustic guitar.

I have to list this even though I can’t find it any longer. It’s worth mentioning that I’ve used this as a hammer and has still worked as it was originally intended – a mic.

I predominantly design in Photoshop and Illustrator with a Wacom tablet. I keep connected with Sketch and Figma but I might be just a little too old school to leave the Photoshop tools behind. Hand-drawn artwork is lovingly paired with Krita. ImageOptim is a favorite utility app. It’s an image compression utility that just works! When creating/editing imagery that will go on the web, keeping the file size as low as possible is important. ImageOptim does this quite painlessly.

Simple – VS Code. A text editor that is fun to use. By far, my favorite features are Git integration and a Terminal right in the ditor. Regular updates and a massive marketplace make it an undisputed leader in text editors. For a few years I used (and loved) ATOM. Before that was Brackets – with its super cool in-line editor model . Sublime and Text Wrangler is where the love strated with editors. I wonder how these apps hang given the marketshare that VS Code has.